A fractured and suitably sized bedding for pipe and fittings.

The individual official, board, department, or agency established and authorized by a state, county, city, or other political subdivision, created by law to administer, and enforce specified requirements.

Manufacturing, installation, and testing standards issued by the American Society for Testing and Materials.

All the material used to fill the trench from top of bedding to finished surface.

Material used to fill the trench from top of bedding to a designated height over the pipe.

Non-compacted material in place in the trench.

The cylindrical portion of a vitrified clay pipe exclusive of branches, spurs, joints, and handling rings or lugs.

The materials, their placement, consolidation, and configuration, as designed to support and to develop field supporting strength of vitrified clay pipe.

Material placed under and around clay pipe to develop the required load factor.

The flared-end portion of a vitrified clay pipe or fitting, designed to function in the joining of other such pipe.

A convex, raised area on the pipe surface indicating an internal separation.

An earthy or stony mineral aggregate consisting essentially of hydrous silicates of alumina, plastic when sufficiently pulverized and wetted, rigid when dry, and vitreous when fired to a sufficiently high temperature.

Densification of soil by means of mechanical manipulation. (Per ASTM D653)

A disk of compressible material placed between the ends of adjacent pipe for the purpose of distributing the jacking force.

A joint designed so that a sealing action is obtained by compressing elastomeric components.

A pipe for conveying fluid.

The gradual reduction in volume of soil over time.

A device, typically made of an elastomer, used to connect clay pipe barrels. These devices are typically used in conjunction with stainless steel tightening bands.

The load imposed on pipe that is determined by depth and width of the trench at top of pipe, as well as unit weight and character of backfill material.

A value in lbs. per cubic foot of volume for a given material.

Trench width at the level of the top of the pipe.

A piping system used to collect and carry off surface and ground water.

Special materials, their placement and configuration which are designed to fully surround the pipe and develop a field supporting strength which exceeds that developed by other commonly used installation and bedding techniques.

Material used to fill the trench from the top of the initial backfill to the finished ground surface.

Products such as wyes, tees, elbows, adapters, etc. used in the installation of vitrified clay pipelines.

A means of compacting trench backfill by the introduction of water by gravity.

The native or prepared trench bottom on which the bedding is placed.

That portion of a vitrified clay pipe from which a fragment has been broken. It is distinguished by well-define fracture faces and sharp edges where the fracture faces meet the surface of the pipe.

A drainage fabric which allows the flow of water while preventing the movement of soil. 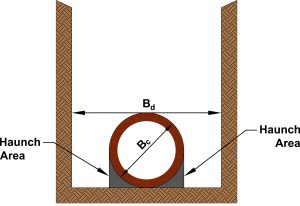 Utilizing a shovel, spade, or other suitable tool to place and compact the bedding material in the haunch to (1) assure the pipe will remain true to line and grade and (2) provide uniform circumferential support to the pipe which is essential for the total load factor to be realized.

The units of length, area, volume, weight, and temperature in common use in the United States. These include but are not limited to: (1) length-feet, inches, and fractional inches, (2) area- square feet and square inches, (3) volume-cubic feet, cubic inches, gallons, and ounces, (4) weight-pounds and ounces, and (5) temperature-degrees Fahrenheit.

The water-conveyed residues resulting from manufacturing or processing operations.

The quantity of ground water entering the pipeline in the test section during a specified time period.

Location for placement of selected material, native or import, extending from the top of the bedding material to an elevation 1ft. above top of pipe.

A method of installing pipe by the trenchless method using equipment and pipe designed for this purpose.

The force applied to the pipe along the longitudinal axis of the pipeline by the pipe jacking equipment.

A structural component that houses the hydraulic cylinders used to propel the tunnel equipment and pipeline. The jacking frame serves to distribute the axial thrust load to the pipeline and the reaction to the shaft wall or thrust wall.

Jacking or Launch Shaft or Pit

Excavation from which trenchless technology equipment is launched for the installation or renewal of a pipeline.

A means of compacting trench backfill by the introduction of water under pressure through a nozzle.

An individual length of pipe, or the means of closure to form a pipeline.

A device that sends a straight beam of light on the proper line and grade to a target.

The portion of the load transmitted to pipe from wheel or tread impacts.

Specific group of clay pipe having characteristics of sufficient similarity that individual specimens selected from that group may be considered representative of the whole group.

The movement of soil into adjacent material.

A pipe with an end angled to mate with a complimentary pipe end or adjust to another surface.

Material present in or which has been removed from the trench.

References the internal diameter in name only to the nearest unit dimension.

A device designed to control the direction or characteristics of a fluid flow (especially to increase velocity) as it exits or enters and enclosed chamber or pipe. Nozzles can be static or rotational.

Also known as Pilot Tune Method (PTM), Pilot Tube Microtunneling (PTMT), Guided Boring Method (GBM), and Guided Auger Boring (GAB). This technique is a multistage method of accurately installing a product pipe by use of a guided pilot tube which is followed by upsizing to install the product pipe.  In PTGBM, the guidance system consists of a LED target housed in the steering head, digital theodolite with camera and a monitor screen.

Process by which existing pipelines are broken by mechanical fracturing from either inside or outside with the remains being pushed into the surrounding soil while simultaneously inserting a new pipeline of equal or larger diameter.

Pipes joined to provide a conduit through which fluids flow.

The section of a sewer between structures.

Excavation into which trenchless technology equipment is driven and recovered following the installation of the product pipe.

Each pipe or group of pipe selected from a lot and used to determine whether the product complies with the specification criteria.

Process of selecting samples from a lot for use in testing.

A separate or bonded material between the sleeve and the pipe that forms a seal.

A method of isolating and testing portions of an installed pipeline to determine the location of an air loss in excess of the standard.

Waste matter carried off by sewers.

System for collection, treatment, and disposal of sewage.

A thinly stratified, consolidated, sedimentary clay with well-marked cleavage parallel to the bedding.

Wood or metal restraints used to support the trench walls.

Movable trench box used in place of sheeting and shoring.

Equipment used to prop or support the trench sheeting or trench wall directly.

Utilizing a shovel, spade, or other suitable tool to place and consolidate the bedding material in the haunch to assure the pipe will remain true to line and grade and provide uniform circumferential support to the pipe which is essential for the total load factor to be realized.

A coupling which contains or compresses the sealing element and meets the requirements of the standard. The sleeve may be affixed to one end of the pipe at the factory.

A method of inserting new pipe into an existing pipeline.

Trenchless installation of pipe by jacking the pipe behind a remotely controlled, steerable, laser guided, microtunnel boring machine that provides continuous support to the excavated face under various geotechnical conditions including the presence of groundwater.

The portion of a jointing system that is designed to accept a plain-end pipe or a spigot-end pipe.

The individual engineer, firm, or political subdivision charged with and having the responsibility for the design of a facility, product, equipment, or material requirements.

Sample, or portion thereof, which is to be tested and the test results to be reported.

That portion of a vitrified clay pipe that fits into the bell or coupling of the preceding pipe.

The line of maximum horizontal dimension of the transverse cross section.

In pilot tube method, a rotatable slant faced unit located directly in front of the lead pilot tube that can be adjusted to steer the bore.

A plug inserted in a pipe or fitting.

Load imposed by travel over, or by material brought and placed over the trench area, after pipe installation.

A method used to field connect a building sewer to a main line.

The portion of pipeline under test.

An instrument for measuring both horizontal and vertical angles.

The trench width, measured at the top of the pipe barrel, where backfill loads reach a maximum and are equal to embankment load.  Further widening beyond this width will not affect the backfill load.

(As defined by the North American Society for Trenchless Technology)

Visual inspection, without the use of special equipment or enhancement excepting the use of corrective lenses.

A pipe made from various clays or combinations thereof which are shaped, dried, and fired to a point where the glass-forming components fuse to form a bond between the crystalline grains.

Vertical barriers placed across the bottom of the trench to prevent migration of soil fines due to water movement.

Single or multiple pipe which are usually fitted with a screen for the temporary removal of water from the bottom of the trench.

Form Submission is restricted
Form is successfully submitted. Thank you!